Dr Brown was featured in an article published by Rush University Medical Center News.  Copy of the article below and original publication can be found HERE.

A Close Look at Glaucoma

‘Love Is Blindness,’ but Bono’s eye disease doesn’t have to be

When U2 performs five upcoming Chicago concerts scheduled from June 24 to July 2, fans of the Irish rock superstars will see the familiar image of lead singer Bono wearing his signature sunglasses.
Bono’s shades have been a key element of the band’s visual identity ever since he donned wraparounds as part of The Fly character he created for the band’s early 90s “Zoo Station” tour, but it turns out there’s more to them than mere rock star affectation. Last fall, the singer revealed that he’s had glaucoma for 20 years, and that he wears his sunglasses to offset the effects of eye disease. “I’ve had glaucoma for the last 20 years. I have good treatments and I am going to be fine,” Bono said during an appearance on a BBC talk show in October. It’s common for people with glaucoma-related vision loss to wear sunglasses, which cut down on the glare that is one of glaucoma’s effects, says Steven V. L. Brown, MD, associate professor of ophthalmology at Rush and founder of Chicago Glaucoma Consultants.
“Different areas in different parts of vision are gray and fogged. In advanced cases, it would be like looking at a pond with a mist above it,” Brown explains. Here, he shares insights into the disease that affects everyone from Bono to an estimated 3 million people in the U.S.

Glaucoma is the name for a group of numerous diseases characterized by progressive damage to the optic nerve, which carries signals from the eye to the brain. In open-angle glaucoma, which accounts for the majority of glaucoma cases, a fluid that flows through the front of the eye builds up to cause damaging pressure on the optic nerve.

Groups at greater risk for glaucoma include but are not limited to: African Americans, diabetics, people with nearsightedness, relatives of people with a glaucoma diagnosis, and people over age 60. Brown says that certain kinds of exertion can play a role as well by causing the optic nerve to change.
“Intense exercise such as heavy weight lifting, lots of yoga with the head down, straining from playing wind or brass instruments or even singing can raise eye pressure,” he explains. Which means that all those times Bono cried “in the naaaaaame of love!” could have something to do with his condition.
Only half of people with glaucoma know it, according to the Glaucoma Research Foundation. “It isn’t painful, and most people don’t notice any vision loss until its in a moderate to advanced stage,” Brown says.

Left untreated, glaucoma can lead to blindness, as it has for 120,000 people in the U.S. That possibility led Bono to joke during his talk show appearance, “You’re not going to get this out of your head now and you will be saying, ‘Ah, poor old blind Bono.’”

In actuality, the singer said, he has 20/20 vision, but it’s hampered by cloudiness and rings appearing with lights and objects. In addition to these common symptoms, people with untreated glaucoma slowly lose both peripheral and central vision and eventually may lose all sight.

While glaucoma has no cure, and the vision damage it causes can’t be reversed, treatments can delay the progress of the disease greatly. “In my career of 30 years, we’ve made great strides in reducing the incidence of blindness due to glaucoma,” Brown says.

“Topical medications are very effective, laser therapy is another safe alternative, and we’re finding that even using surgery as an earlier treatment may be more preventive in avoiding damaging blindness.”
Thanks to these advances, the chance of blindness from glaucoma has been cut almost in half, according to a study by researchers at the Mayo Clinic. The study of patients diagnosed with open angle glaucoma from 1965 to 2009 found that those diagnosed by 1980 had a 25.8 percent rate of blindness after 20 years, but that the rate dropped to 13.5 for patients diagnosed beginning in 1981.

Still, the lead researcher for the study called these rates of blindness “unacceptably high,” due to late diagnosis of glaucoma. He emphasized the importance of routine eye exams to detect glaucoma early.
Brown recommends the following schedule of exams if no risk factors for glaucoma are present:
“The exam involves not just assessing intraocular pressure, but looking at the optic nerve and assessing it,” he says. “Taking this simple precaution can enable eye care specialists to detect glaucoma before eye damage even begins and begin treatments to can maintain vision.”

Posted by Nicole and Scott Kesten at 8:03 AM No comments:

Email ThisBlogThis!Share to TwitterShare to FacebookShare to Pinterest
Labels: brown 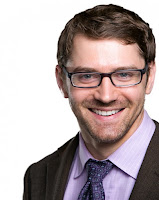 Drs Brown, Gorla and Breunig spend time each month with the residents and enjoy being able to pass their experience on to future clinicians.
Posted by Nicole and Scott Kesten at 7:47 AM No comments: